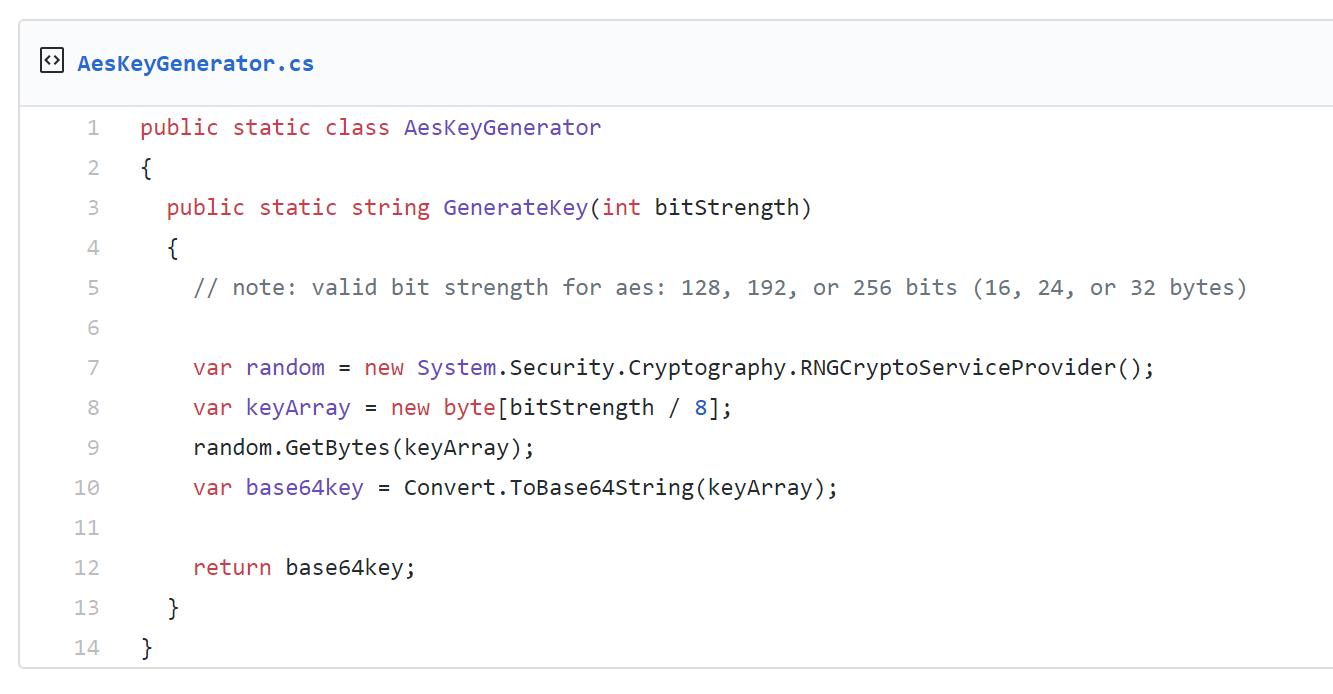 Creating and managing keys is an important part of the cryptographic process. Symmetric algorithms require the creation of a key and an initialization vector (IV). The key must be kept secret from anyone who should not decrypt your data. The IV does not have to be secret, but should be changed for each session. Asymmetric algorithms require the creation of a public key and a private key. The public key can be made public to anyone, while the private key must known only by the party who will decrypt the data encrypted with the public key. This section describes how to generate and manage keys for both symmetric and asymmetric algorithms.

The symmetric encryption classes supplied by the .NET Framework require a key and a new initialization vector (IV) to encrypt and decrypt data. Whenever you create a new instance of one of the managed symmetric cryptographic classes using the parameterless constructor, a new key and IV are automatically created. Anyone that you allow to decrypt your data must possess the same key and IV and use the same algorithm. Generally, a new key and IV should be created for every session, and neither the key nor IV should be stored for use in a later session.

To communicate a symmetric key and IV to a remote party, you would usually encrypt the symmetric key by using asymmetric encryption. Download microsoft office 2010 professional plus key generator free. Sending the key across an insecure network without encrypting it is unsafe, because anyone who intercepts the key and IV can then decrypt your data. For more information about exchanging data by using encryption, see Creating a Cryptographic Scheme.

The following example shows the creation of a new instance of the TripleDESCryptoServiceProvider class that implements the TripleDES algorithm.

When the previous code is executed, a new key and IV are generated and placed in the Key and IV properties, respectively.

Sometimes you might need to generate multiple keys. In this situation, you can create a new instance of a class that implements a symmetric algorithm and then create a new key and IV by calling the GenerateKey and GenerateIV methods. The following code example illustrates how to create new keys and IVs after a new instance of the symmetric cryptographic class has been made.

The .NET Framework provides the RSACryptoServiceProvider and DSACryptoServiceProvider classes for asymmetric encryption. These classes create a public/private key pair when you use the parameterless constructor to create a new instance. Asymmetric keys can be either stored for use in multiple sessions or generated for one session only. While the public key can be made generally available, the private key should be closely guarded.

Both methods accept a Boolean value that indicates whether to return only the public key information or to return both the public-key and the private-key information. An RSACryptoServiceProvider class can be initialized to the value of an RSAParameters structure by using the ImportParameters method.

The following code example creates a new instance of the RSACryptoServiceProvider class, creating a public/private key pair, and saves the public key information to an RSAParameters structure.

Fills an array of bytes with a cryptographically strong random sequence of values.

When overridden in a derived class, fills an array of bytes with a cryptographically strong random sequence of values.

The array to fill with cryptographically strong random bytes.

The following example creates a random sequence 100 bytes long and stores it in random.

The length of the byte array determines how many random bytes are produced.

The span to fill with cryptographically strong random bytes.

Fills the specified byte array with a cryptographically strong random sequence of values.

The array to fill with cryptographically strong random bytes.

The index of the array to start the fill operation.

offset or count is less than 0

offset plus count exceeds the length of data.